There can be a huge confusion when it comes to flying into Kansas City Airport. One has to disassociate the name of the city (and airport) with the state names. After all, Kansas City lies partly in Kansas and the rest is in Missouri. The airport is also in Missouri, But then I shouldn’t be surprised – the Cincinnati (Ohio) Airport is actually across the Kentucky state line.

Getting to the airport was easy on BART. Navigating the airport was also easy. Security now has the new fancy scanners on most lanes so that you don’t have to take stuff out of your luggage, backpacks, and cases. The airport itself was the usual crowded place. PowerPoints at the desks and tables were all non-functional near my gate. But, unlike many airports, the frequent outlets along most corridors were functional resulting in my being charged up and ready to go.

MCI (airport) has an extremely weird setup. Once you exit the plane, it is hard to figure out the escape route from your section of the terminal. But, unlike other airports, the baggage claim for your flight is immediately outside those doors. I am thinking that this makes it easier for baggage handlers and results in much less lost/unclaimed luggage. The downside is that I saw neither airline personnel nor baggage handlers anywhere in the area. What happens to unclaimed luggage?

Lyft/Über is the only way to get to my hotel – discounting taxis and car rentals.

I checked in and crashed.

Total stitching for the day was on Leo. Not bothering you with a picture since a center column or outside border are boring…. 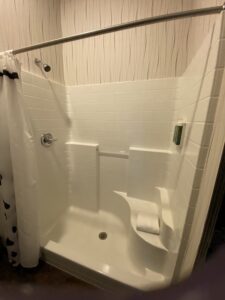 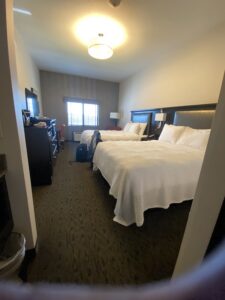 and a good size room overlooking the lake