For years, I was an unabashed DOS supporter and dealt with the early versions of Windows before I became so frustrated that I shifted to Linnux for a number of years. After starting the kids (well the three younger in anywise) off with MAC products in the first place, I shifted over while stationed in the UK. Wow – that was 2008-2010. Seems like either yesterday or a different lifetime. There have been more than the occasional challenge with some particular software needs, since not all developers produce for both operating systems. Noah wound up needing a windoze machine since his CAD-CAM engineering software just doesn’t run properly in emulation.

I purchased one of the original iPads. I still have the heavy sucker. It works, it doesn’t leave the house. In fact, some of my favorite bubble popper games run on it just fine. The software no longer updates, and neither do many of the programs. But as a basic tablet on which to read, play solitaire, or watch programs – it is just fine. I mention this because I wound up wasting the morning dealing with my iPhone. As we were late getting out of the house, arriving at Apple 20 minutes after they open meant about an hour wait for a tech. Nice young woman, managed to do a magic reset and recommended yet another software update (seems like the last update fixed a number of problems, but then added a new one that bit me.

From there, since my local JoAnns failed to have about nine colors that I need for my new cross stitch project, we detoured to Michael’s in Emeryville. Five minutes to find what I needed (four of the colors- the other five – nope) and 20 minutes standing in line to check out.

Then home to find my new toys had arrived. Embroidery Floss storage toys might not interest you. For that matter, cross stitch may not interest you at all. If it does, you already know the following (and if not, you are welcome to stop reading). Designs usually come on charts which can be PDF files or hard copy printed. Most of us, when using hard copy, print an extra so that we can write all over it while preserving the original. The design itself can be full coverage (the whole fabric is covered – duh) or be elements with portions of the fabric showing. In either case, counted cross-stitch depends on the correct placement of the correct colors. Old school is printed paper, and colored pencils or markers in order to check off every square that has been stitched.

(Bored yet? I warned you)

Obviously, this is problem in search of an electronic solution. Enter Pattern Keeper. which unfortunately is only available in Android at the present. The program imports – can get rid of overlap sections and can be marked off square by square. It also will highlight all the instances of a particular symbol. The stitch area can be expanded or shrunk as needed. 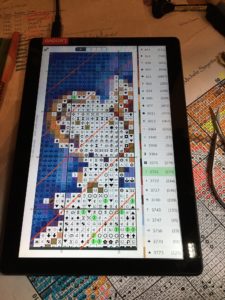 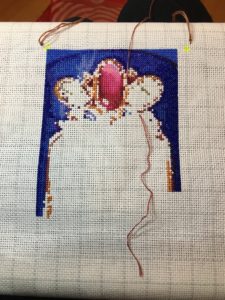 which leads to accurate placing of stitches

And yes, this is pregridded fabric. It so much fun!