In general, BART needs a face lift. Badly. The current set of cars are old, clunky, difficult to keep clean and lacking in what has come to be routine in major cities as to signage and accessibility.

As it happens, there are new trains on the way. Not at all like the test cars which have been in the system for a couple of years; these new cars are sleek. The seats can’t be taken apart by any enterprising subway sleeper. They have significantly less seating but markedly better standing space. The handicap locations are clearly marked as are the bicycle areas. What is even more important is that there is electric signage. At the end of the car, the sign clearly states the current station. The electric boards in the cars have both station information and map with the current location clearly noted.

Gee! Just like a real subway that you would find in any International city! 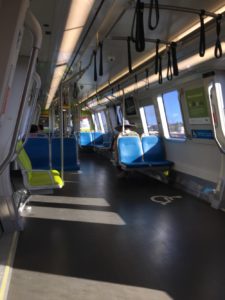 The seats are suspended so that cleaning should be easy. There are no cushions to be pulled off or stolen. There is signage. Plus, none of the seats would be comfortable for sleepers.

I wonder how soon the homeless advocates are going to complain that these cars discriminate…..

Discussing the new cars was by far better that talking about today’s baseball game. Let me just leave it with – didn’t suck as badly as yesterday….