Sucks at the best of times. This morning was not one of those. In the future, I think there are two choices – either get on the interstate at University Avenue, work my way over to the left hand HOV lane and drive faster than a crawl. Or.. take the frontage road all the way on the Bay side to Powell Street and get on the freeway there which is just at the start of the maze and just short of where the HOV lane dumps in from the northbound branch of 580. I did the worst – got on in between University and Powell which meant there was no chance at all of getting safely across 5 lanes of traffic and having to spend more than 20 minutes crawling along between two freeway entrances.

The only good thing was that once we were past the start of the congestion we were able to access the right hand HOV lane and literally flew along the right fly-over looking down with sneers at all of those sitting in stopped traffic. HOV here is 3 people in the car which should explain why I had Noah up and about much earlier than his normal routine. Him getting sleep was much less relevant to me than shortening our car ride by an hour or more. Once past the toll plaza, the traffic wasn’t all that great but moving is much better than creeping or standing still.

I have finally figured out UCSF’s parking ramp. Having also appropriated Alex’s old wheelchair from its (final-not) resting place in the garage where it was stored just in case anyone would need it again, we made fast work of getting from the garage to the clinic. Yes, George can walk but he still is having significant foot pain so why would we make him hobble?

Appointment went well. Number of meds is not going to decrease anytime in the near future. OTOH, it is obvious that the stem cell transplant has taken hold.

I managed to finish embroidering the last of the little girls onto the quilt top.= 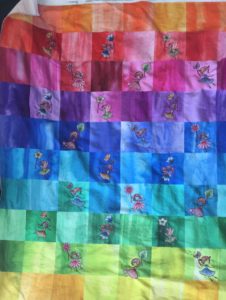 now it is just a matter of the backing, quilting and tossing it over to Shana for the finishing.