Rather than provide you with another day of doom and gloom (I think all the major news outlets, TV stations, and talking heads are doing more than a complete job of that) I will divert to one of the new residents of our house.

Arriving in December along with Miriam and Angel when they moved here from New York over the winter holidays, Kitty wasn’t a completely happy cat. After being forced to diet for weeks – who knew that the airlines both had and enforced a weight limit on under seat animal carriers of 20# (around 9 kilos) – Kitty has settled into a reasonable routine.

During the day he sleeps a lot, in the evenings he prowls. On a schedule known only to him, he nags for food, pokes his head in corners, and vary studiously avoids doing those things which will get him in trouble – at least while someone is watching. After several months, I am more than used to him stalking around the living room in the evening, occasionally complaining, or watching the squirrel channel through the back living room door.

Then George decided a treat was in store and a package arrived via DHL – full of various Haribo candies. As an aside – I think he ordered on line in an attempt to get the German versions of the candies rather than the US market version. A number of products are like that, most noticeable Nutella which has a different formulation (related to oils used) in North America than Europe.  In any case, there was marked interest in various gummis. Being good, and liking my teeth In my head, I declined. Forgetting about candy, I settled into my chair to listen to an audiobook and stitch.

But there was this funny crinkling sound. Looking up – 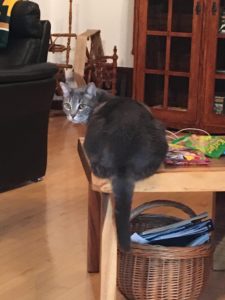 I am invisible, you do not see me

said cat was sitting on the end table. Like most cats, he likes things that crinkle. Ok, he isn’t allowed on the end table, but I was thinking this was actually pretty funny. Cat finding the only thing in the room that could make interesting noises. You can see several bags of candy sitting on the table next to him. After carefully considering his choices, he picked up a bag and headed toward the stairs.

I sent the picture to the family on WhatsApp. Next thing I know, Miriam is flying down the stairs and takes the ill-gotten goods away from the thief. Turns out Kitty adores Gummi Bears. As in rips into the bag and eats them.

And of course he gets sick.