I have been working on a new project for the last several days and finally inserted a page for it under the project Menu. 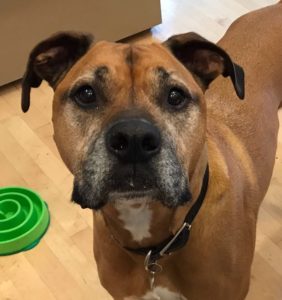 Lou was a good dog.

If you know dogs, there are some that are loved by their owners, but no one else would ever say that they were good.

Not so with Lou. He was a good dog. Sociable, traveled well, polite, friendly but not overwhelmingly so and lived for his job. His job being working all day with David. It is a hard job for a dog, keeping a contractor under proper supervision. The whole day may be traveling around in the truck and visiting job sites (we will not mention the occasional treat) and keeping one’s person properly supervised.

This was Lou’s role in life and he filled it admirably. But in April, not so young a dog anymore, he became ill. Multiple vet visits and treatments, it was obvious he wasn’t ever going to get better and was absolutely miserable.

Since there is snowballs chance in hell of David ever reading this, I feel safe in posting that I am making decent progress on a present for him. I don’t know that he wants a picture of Lou on his wall, but I think he just might need one.