↓
Home→Sports→Baseball→kids day at the park 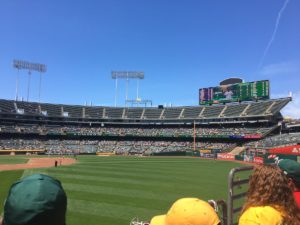 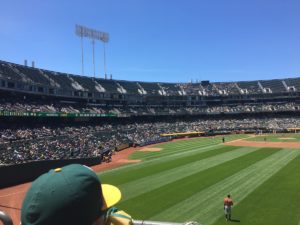 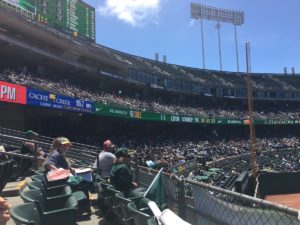 there were more attending today’s game than were here last night. While the attendance might not seem much to you, it is impressive for a Wednesday afternoon, especially during the school year.

Apparently it was student day. I am used to seeing buses during the summer as teams, programs and summer camps fill Wednesday afternoon’w with trip to the Oakland Coliseum. But in May?

Since I was running late to the game and actually didn’t arrive until after the first pitch, I didn’t notice the dozens of school buses in the parking lot. Since I normally come in the ADA entrance on the BART side of the stadium, there weren’t lines of young people to wade through. But what became obvious early on was that there were a LOT Of young voices yelling. And yelling interesting chants at strange times.

There must have been 16 high schools, a dozen middles schools and an equal number of elementary schools with their names prominently featured on the big boards in the 4th/5th inning breaks. Then there was the great camera work featuring, it seemed, every last group at one time or another.

Even given a 4:2 loss, the kids seemed to be happy with their outing. A cluster of them, high school age, were on my BART headed toward MacArthur. A rather harried late 20s was with them. I asked her how many she had. Only this dozen. Are they all here? I certainly hope so! But most of them ride BART regularly and they all are interested in heading home….