↓
Home→Home→It is not a toilet seat

If you live in a mixed gender household you may, perhaps, have dealt with the discussion on toilet seat up or down. If you happen to have dogs, cats, or small children, the chances are that this discussion is moot. Obviously, toilets are not provided as drinking vessels for pets or play areas for small children. But in other households, the position of the toilet seat, I have heard, is a problem. We solved it a long time ago. Just completely close the thing so that the inconvenience of having to reposition part or all of the seat/cover is an equal burden on everyone.

This essay is not about toilet seats; it is about a shower.

When we renovated the downstairs/main bathroom we elected to go with a large, walk-in shower and completely eliminated the tub. Before you even start a discussion about resale value of houses without bathtubs – I don’t care. I was more concerned about safety and water usage. Resale of this house will not be my problem; those in charge at the time can deal, As well as point out the hot tub on the back deck if someone really wants to soak. As far as small children – tubs are a really bad idea. Slips, falls, injuries and drownings occur. It is pretty hard to hurt yourself or drown while sitting on the floor of a shower. Just saying. 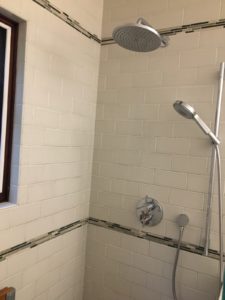 what you see in the lower left hand corner is this – 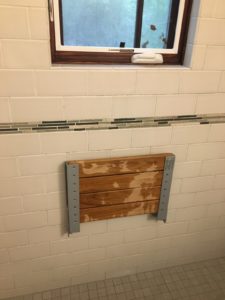 which unfolds to this – 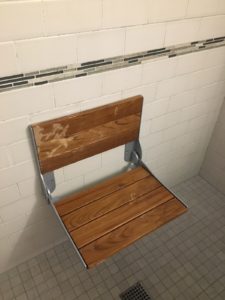 so that you can sit and shower

it is positioned such that handheld shower head reaches without problems. For anyone not stable on their feet, feeling ill, or otherwise not up for standing, it is great. 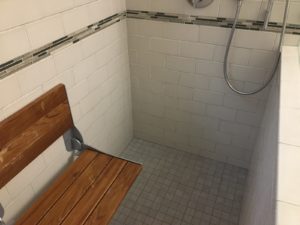 leaving it down when you are done

impinges on the space and is a bruising risk to the next person headed into the shower,

This seat – it is not a toilet seat. It needs to be folded out of the way when not in use …..