↓
Home→Fiber→Cross-Stitch→It is a lot of black

Rather than go on a rant about holidays, hypocrites, and contaminating the environment with fireworks, I dealt with DMC 310 practically the whole day.

DMC 310 (not that you are interested or anything) is the color number for black. I bought a cone of the stuff last fall when it was obvious that buying it a skein at a time was stupid. There are 8 meters in a skein. One pattern alone (The Cryptid one from WitchyStitcher) used almost 10 skeins. So I purchased my own “Cone of Doom.”

The above mentioned designer has a new stitch-a-long called Supernatural Monsters – or some such thing. It also needs a lot of black. The frame was released 1 June, and the critters will escape weekly pretty much through fall at the rate of 3/month with that fourth week being for catch-up. m

Siren is the first – 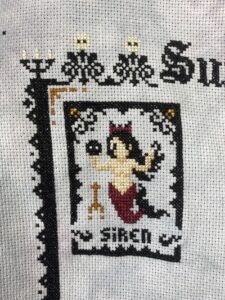 which I started yesterday and finished today.  I don’t have all of the frame done, but I will do it like I did with the last one and stitch it as I go.

So, while I was dealing with all that black, I pulled out Leshy which I have been stitching off and on for a number of months (same designer). By the end of the day – it was a matter of about 1000 stitches of black left. Blech. 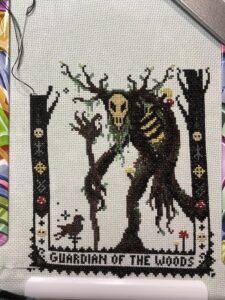 See the side pieces – those are trees with a lot of branches. And all black…