It was quite early when we sailed through the straits from the Atlantic Ocean into the Mediterranean Sea. Like 0500 in the morning early which meant a fairly early docking and the ability to watch the sun come up over the Spanish Coastline. 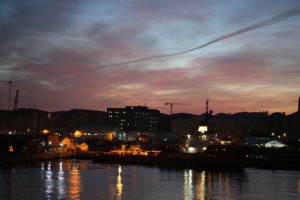 When I have been here before I walked various areas, saw things on my own. The first time I hiked up to the Pillars Monument and the old Jewish Cemetery as well as seeing most of the town. The next time, cable car up and was entertained by the Barbary macaques. (Yes, they are biologically monkeys, not apes). Then there is the Orthodox area, the needlework/linen place that is always closed, the military museum and various other things easily walkable from the port.

Ships from above (us and P&O)

The runway. Traffic has to be stopped for take offs and landing. The buildings in the upper left are the border crossing from Spain

This time I actually joined a small group for a tour so that I could see the tunnels and St Michael’s Caves. We also made a couple of overlook stops, drove around to the backside of the Rock, the mega-cannon and generally most of the winding one way streets and alley ways.

First – Michael’s Cave. Background – the Rock is limestone and riddled with caves (in addition to the 33+ miles of tunnels built by various militarys. The cave over the years has been turned into a concert venue complete with risers, seating and stage area.  There are lights running which change colors. The walls themselves are amazing. We spent about 20 minutes going up and down all the stairs and exploring. The acoustics were incredible, even if the person testing them out was not.

Our next stop was the macaques.

Followed by the Siege Tunnels –

The start of military use of caves

Replica of the inside of the point for the lookouts

And a rather large Cannon

Information on the gun

and the massive gun (one of only four worldwide)

It was a rather lovely day in all. We had a good time plus end of the day entertainment from the P&O Ventura which needed to play Rule Britannia, God Save the Queen and a few other very English selections on the way out of port at top volume.