↓
Home→Military→Get a poppy, wear a poppy 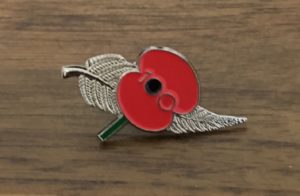 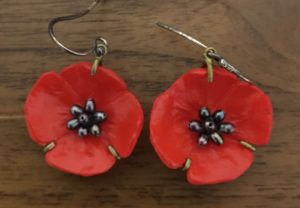 earrings found in Australia, US Artist

This is not a day for going shopping, dealing with holiday decorations (hello? for those in the US – Thanksgiving isn’t even over!) or those idiots who are trying to capitalize on individuals service for their own personal gain.

“Thank you for your service” has become trite. Most say it with about as much meaning as people greet with “how are you doing?” Few really mean it, want an answer. In the US, it has become a pro forma way of passing off obligation to others. No, I agree that when one is created by someone who means it, you can tell. When you are greeted by someone else who has a family connection to the military, when someone recognizes that it is not only men that serve. I will save my American Legion rant for another day.

The US attitude toward the military has undergone a remarkable change since I was in high school and University. That was the time of the Viet Nam War. Patriots served, most of the men in my High School served. Being found unfit, in that rural area, was not a matter of pride (as it seems to have been for those with money in other areas of the country). At University, it was another world. Most of the young men in my classes were on academic deferments, a serious motivation to study. Protests ran often and deeply divided the campus. Even the International Folk Dance group, a non-political gaggle if there ever was one, had a serious discussion about continuing to use the Armory for the weekly dances. As no other space was available on Tuesday evening, political feelings took a back seat to practicality.

In the late 70s, post Viet Nam, when I joined the Army Reserves, being a part of the military was totally and completely unthought of. Why would anyone do that? The war is over. I had a slightly different attitude, spurred by school loans and a decision that those who served deserved health care. That and it would be a chance for someone else to pay me to get out of Minnesota at least once a year.

Seems rather superficial, now that I think about it from 41 years down the line. On the other hand, I doubt that everyone has completely altruistic reasons for their choices. But in 2013, two years after the Army invited me to retire, I was in Esperance, Western Australia. It was Remembrance Day, Armistice Day, Veteran’s Day – whatever you want to call it. Esperance is that Australian town which, in 1979, fined NASA for littering after the Sky Lab broke up and dropped pieces all over their town. It is also a place where knowledge and connection to WWI runs deeply.

I wrote about it then.* The experience of standing with veterans from Australia, New Zealand, UK, Canada. Talking to a woman who had deep ties to the area. Standing with other women who had served their countries. It made a difference to me, and I think it made a difference to others, knowing that, even in your small town which others might considered off the western edge of nowhere, that serving our respective countries binds us all together. That moment of silence, a chance for reflection.

So, for my fellow service members, wear your poppy with pride in recognition of all those generations prior to ours who served our respective countries. For everyone else, if you want to thank someone, be sincere and think about what you are saying. Better yet, wear a poppy today and tomorrow, reach out and do something positive. Participate at one of the cemetery clean-ups. Volunteer at a soup kitchen, deliver meals, reach out to those families you know with a member deployed. Bring my world a little closer to yours.

* the absence of pictures from posts prior to 2015 is a result of moving servers from Germany to the US. When the Germany site came down, the links were broken. I have to find the old picture archives and upload those one by one by one.. and .. there are other things that are higher on the priority list.