the whole flamingo thing started in 2003 when this particular set of wind chimes, seen hanging from an internal second floor window here in Berkeley, arrived in the mail while I was serving in Kuwait 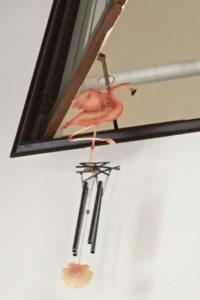 I still don’t have a clue as to why Carmen thought I needed a wind chime. No one ever spent time outside except in transit between trailer, office, mess hall, meetings. I arrived just as we were headed into the warmest part of spring where temperatures often hit 40*C by lunch. It definitely served as a conversation starter, hanging from my ceiling light in the middle of the room.

A bit later in the year, the flamingo was joined by a menagerie of origami animals courtesy of Pat. Unfortunately, I can’t offer a picture as they hid from packing when getting for my move back to Germany in summer of 2004.

If I want to be honest, the whole flamingo thing started in 1978 when George and I received a couple of pink plastic flamingo lawn ornaments for a wedding present. We included them in our house hold goods for years, but some time in one of those transAtlantic moves they were lost.

The single metal flamingo that was standing guard over the lemon tree when we purchased the house is still in its location atop the retaining wall. Looking down, it can see my own flamboyance of flamingos, four with solar collectors to light the night and the other two anchoring both ends of the small area between the patio and front door.