There are those whose stitching love heads toward reproduction samplers. There are those who like serious compositions of still life. Others have a love of bug-eyed fairy girls. I am speaking of cross-stitch patterns here, not collectors’ items or photos on the wall, but it could apply there as well.

I have a few designers whose patterns I enjoy stitching more than others.  One of those is Barbara Ana Astray Mendez. Creative Poppy Patterns

is the best on-line source of her patterns that I have found. But then, of course, my preference is for PDF patterns which I can load into PatternKeeper.

The latest of hers has been released as a mystery stitch-a-long in three parts, the final one of which was released yesterday. Since I hadn’t really finished part 2, it took me until tonight to finish both parts 2&3.

Part 1 was only about 800 stitches and was comprised of the sun/moons/stars overhead. Part 2 was the wings – about 1600 stitches worth. So I should have been expecting the 2400 stitches of Part 3 which was the entirety of the young woman. 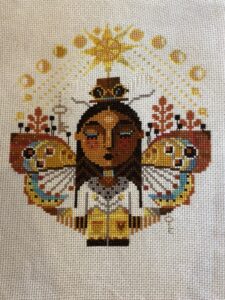