At this point, it is waiting and consumes about as much energy as watching paint dry.

Seriously, it is nap, hang out, watch for side effects, complications, or infections (and hopefully none of the above).

So I thought I would talk to you about Robo.

Some bright person somewhere in the hospital, who if they are sensible, will never, EVER, admit that this was their idea, decided that robots could deliver certain items more safely and securely than people. And it was not a one time purchase. 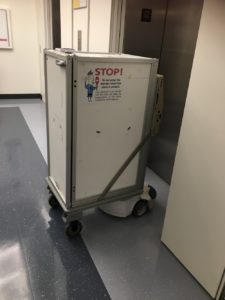 They do not share space. There is a robotic voice feature that basically says “get out of my way.” If you are already on an elevator, it may tell you to leave. If you are both at the elevator, it will tell you that you can not ride with it. Note – TELL, not ask,. I have the suspicion that the robots are disruptive enough that they do not allow them on the utility elevators which means that they are restricted to interrupting visitors and staff, rather than patients being transported between hospital locations. 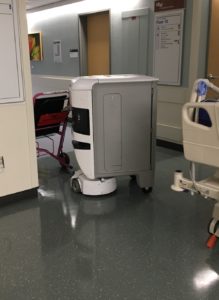 It took several of us to free up this particular bit of idiotic machinery, as it was stuck. There was a bed in the way, there was a chair in the way. Oh, horrors! And this is one of the new models. It has flashing lights, the same robotic voice. If you have a real desire to learn more – there is an article about Tug in 2017 on Wired. Or its home page on Aethon. Note – there are no prices on the website. Frankly, I don’t see it as a money saving measure – given initial investment, maintenance, and the requirement for people on both ends of the supply run, which means that it doesn’t really improve patient safety in delivery of medications, blood products or surgical instruments. There is the issue of contamination as it rolls in and out of public spaces. And finally,  they get stuck. The end result of which means that it is not what you want for anything that is an emergency. It probably is cheaper than replacing a pneumatic tube system in an older facility, but there is something seriously to be said about investment in people.

I am now at USO at SFO. Taking the red-eye from here to DC. The ISTM meeting starts on Thursday morning. As an every two year meeting, I try not to miss. I would make the exception this year except for the fact that I am the co-chair of one of the working/interest groups and made the commitment to be there for the meeting last fall (before any of the current challenges materialized). Even so, I might have bailed had not two other committee members done (including the local organizer) so leaving it down to my co-chair (French) and the sec/treasure (Canada).

The two eldest will be checking on George, I will be making extensive use of FaceTime. And I paid for trip insurance in case I have to head home early.