the day (June 6, 1944) in World War II on which Allied forces invaded northern France by means of beach landings in Normandy. Today is the 75th Anniversary. All who served in that war, no matter which side, are now in their 90s. Our memories are short; the further we get from that conflict the easier it is to revise history. To discount the burden on those involved at the time, respect for all those who died, and the impact of post war on the future of more than just the countries directly involved with fighting on their lands. It isn’t just the Holocaust survivors of whom I speak, it is all who underestimate the impact on our politics today. That war, and the follow on Korean Conflict (War) had a huge impact on all of my generation as we grew up in the aftermath with the Cold War. The influence on our parents in turn affected us. And a large number of “us” are today’s politicians.

I headed back to the hotel early last night. Exhausted would have been a polite way of describing my staggering in the door and landing face down on the bed. At 0700 I was back at the hotel, meeting with the rest of the leadership of our working group. (ISTM provided breakfast, so there was a reward for being at a meeting when my body was clearly sure it was 0400). End result, we have a fairly good plan for the next meeting and a potential for joint symposium with a couple of the other special interest working groups. If any of can make a commitment to the regional meetings in 2020, there is a possibility (ick, how German can I get in sentence construction translated into English) of symposium at those meetings as well. 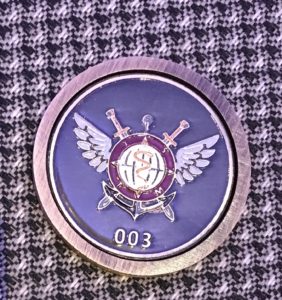 (and a thanks to Miriam. Her logo for our working group has been turned into a very nice coin. Military are all about coins.)

There were a number of absolutely excellent presentations today covering a range of topics from the expected malaria presentation through the handling of emergencies. I should have stayed for some of the evening meetings. Instead, I went back to the Courtyard Marriott to sleep.

(Word from George is that he is stable. Bored out of his mind, but stable).