It was a lovely day – completely free of TV ads. The great thing about watching baseball was seeing the action – the downside was having to watch the same ad over and over and over again. For whatever reason, I seem to be able to tune them out when listening to the radio more easily than when watching.

Baseball games? The ads are fast food, cars, insurance, with occasional detours into mortgage companies. We will NOT talk about Ronan.

Unless. of course, the game involves the Yankees. The total focus of the advertising change. Instead of pickup trucks, it is convertibles and high end SUVs (why do you even need a car in NYC?)  Obviously,  there will be investment brokers and high end vacations. (Note, the fanciest the As get are Toyotas, Ford pick-ups, and the local casino “resort”).

Ah, well – it was time to watch the Oakland Roots – and hear from the community instead.

and on the stitching front – 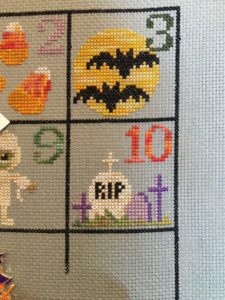 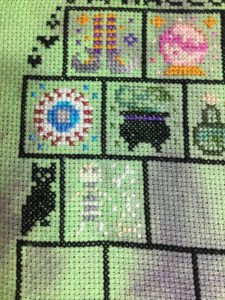 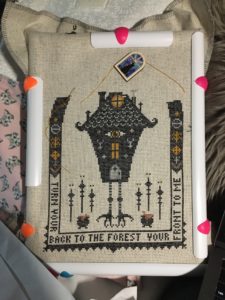 The East Bay has seen/will see the loss of two long standing major sports teams in the next couple of year: The Oakland Raiders – (US football founded in 1960) are moving to Las Vegas and the Golden State Warriors (Basket Ball – in the Bay Area since 1962) are moving to richer climes across the Bay to San Francisco. This leaves the Oakland Athletics (baseball) as the only professional sports team in the East Bay. In case you are counting – The Earthquakes (pro-soccer) and Sharks (pro-hockey) are both in San Jose (which assuredly does NOT consider itself East Bay).

That takes us to the present and the first match  of the Oakland Roots – a member of the National Independent Soccer League – against the Cal United Strikers (Irvine, California). The team is currently using the grounds of Laney College (part of the Peralta Community College system (Alameda County = East Bay). According to the signage – they sold 5300 memberships. According to Wiki – the stands at their (US) football stadium seat 2700. The math doesn’t commute, but the block party ahead of time was a lot of fun, adults, kids, stage with musicians, food trucks and brisk sales of logo gear.

I finally found the rest of the crew with whom I planned on sitting. Tucked in at the SW corner of the field near one of the goals (and the scoreboard) we were seated in one of the booster areas. There is cheering, there is chanting (but I do get irritated at noise for the sake of noise when it doesn’t have anything to do with what is happening on the field).

The game was a tie: Roots scored the first two goals followed by a Strikers goal and another Roots goal. After the half – the Strikers managed two more goals with the game ending in a tie. I like soccer, especially compared to US football (which is all stop and start, requiring that the team following the coaching directives from the side whereas in our current sport, there is continuous play and it is owned and controlled by the players on the field).

The hike from Laney back to the Lake Merritt BART station wasn’t that difficult, but I was more than ready to crash when I finally got back home via the El Cerrito BART station (which was where I had parked the car after a drive over to the Larkspur Ferry Landing. Steven from Southern California was en route to his brother’s and Hamilton tonight. I talked him into a short visit. The drive across the Richmond Bridge was comparable to a week day morning).