I know that in the past I have mentioned the traditions of Captain’s Table. Tonight was the first formal night. I don’t know if there is going to be more than one on this seven day cruise.  Last cruise besides the official Captain’s Table on formal night there were a series of dinners on other nights that were hosted by a variety of the senior officers.

This time, we were invited to dinner with the actual Captain. Norwegian, he is older than many of the recent captains with whom I have sailed and most definitely a lovely gentleman. Soft spoken it wasn’t always possible to hear him over the dining room noise.  Tonight seemed to be the “pineapple” night as is so called by some German friends.  There are other customs common between the ships including a special menu – 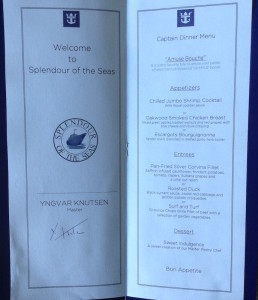 Last week the menu was all meat, this week they had a fish option. I may yet hit up the Executive Chef for a special Indian Vegetarian Meal. Perhaps round up a table’s worth of folks on the next cruise.

Back to tonight. A couple that was on the last cruise, two retired BA flight attendants and a German couple from Wiesbaden. Royal always takes a photo 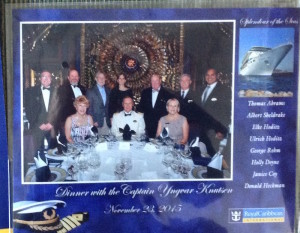 and provides everyone with a copy.

If you didn’t catch it – 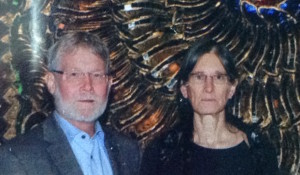 George is on this cruise