The early morning sail in was beautiful – no rain, not cold and lights all about us. The moon was full and glowing. The LA Harbor is actually in San Pedro. Primarily an industrial harbor it also has both a cruise terminal and the USS Iowa Battleship Museum. 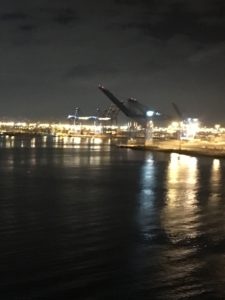 sailing in through the commercial harbor 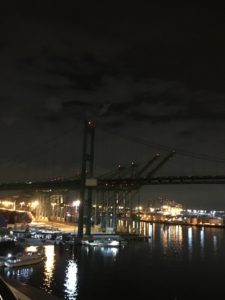 we turned into the cruise terminal just before the bridge

After breakfast with Jill & Graeme, I hung out for a while. Since I had pre-paid a transfer to LAX, why not wait? And wait. And wait…

The morning turned into a challenge for everyone. First there were local police who decided that until they were done with whatever they were doing, no one was getting on or off the ship. Means the ICE folks can’t review the crew manifest. Then “someone” (meaning ICE) didn’t realize how many non-US citizens were on the ship. The two (2) departure/clearance lines bogged down completely when everyone has to go through the passport/visa check/finger print check etc.

Then a bus or two broke down.

Shall we skip all the upset people who were worried about their flights? Or the nice couple several of us pushed to the front of the line? The pair who missed the “walk off” announcement and were waiting to be able to leave the ship. With less than 90 minutes till their flight?

I made it to LAX by noon (original projected time was 1045) and confirmed that SouthWest strictly adheres to the four hour luggage drop off rule.  Terminal 1 was a zoo. No place to hang out. Terminal 2 is the same. But between the two, and across the road (finally found the stoplight and cross walk) sits the Bob Hope USO. They let us old-timers in on a Space-A basis.

There was space. And outlets, and coffee.

I spent time talking with some young Navy guys. An Air Force Tech Sargent on his way to Hawaii fully agreed that he was in the “comfortable service” and there was nothing wrong at all in avoiding both long deployments and tented living conditions…

In not too many minutes, I will be able to drop off luggage and get through security. My flight is just after 2200 and my DH will even pick me up at the Oakland Airport!

I am actually looking forward to being home. Is there a pill I can take for that?