and I forgot to give you a rundown of hats…. 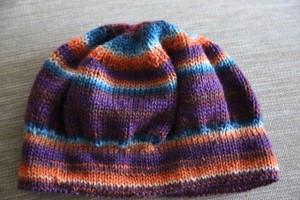 which is knit out of Gradient – one of Schoppel’s worsted weight yarns on 3.75mm needles. The band is double faced for warmth rather than ribbing. I then just added a bunch of stitches (additional 50% of the base) 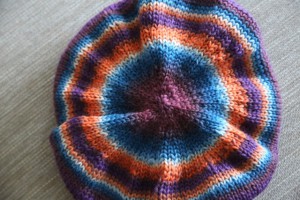 followed by using the match from Beret Circles for the decrease.

The second hat is also from the same bag of gradient and on the same size needles. Hat band again taken from Wurm, 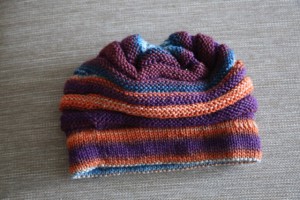 after which I started doing the ridges. Then I got bored which means I stopped short of 10. 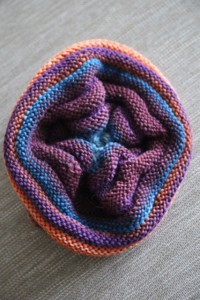 A version of Wurm with mushed top

It does squish the top down, but it is more than large enough for a small-medium woman’s head. In stead of being baggy, it will fit closer to the style of a watch cap. 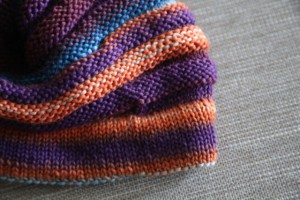 and a band that came out just fine

It obviously was another sea day. See the shawls tomorrow….

fiber person - knitter, spinner, weaver who spent 33 years being a military officer to fund the above. And home. And family. Sewing and quilting projects are also in the stash. After living again in Heidelberg after retiring (finally) from the U.S. Army May 2011, we moved to the US ~ Dec 2015. Something about being over 65 and access to health care. It also might have had to do with finding a buyer for our house. Allegedly this will provide me a home base in the same country as our four adult children, all of whom I adore, so that I can drive them totally insane. Considerations of time to knit down the stash…(right, and if you believe that…) and spin and .... There is now actually enough time to do a bit of consulting, editing. Even more amazing - we have only one household again. As long as everyone understands that I still, 40 years into our marriage, don't do kitchens or bathrooms. For that matter, not being a golden retriever, I don't do slippers or newspapers either. I don’t miss either the military or full-time clinical practice. Limiting my public health/travel med/consulting and lecturing to “when I feel like it” has let me happily spend my pension cruising, stash enhancing (oops), arguing with the DH about where we are going to travel next and book buying. Life is good!
View all posts by Holly →
This entry was posted in Fiber, Knitting. Bookmark the permalink.