It was partway through the day when I figured out that one half of the email list was dated correctly and the other half stated it was “19 Jan 2019.” Now obviously that was not true. What was probably worse was that I originally thought that the 13th was the incorrect date.

Something tells me that I was not feeling as well as I would like to have imagined.

It was obviously a slog to get to school. I made in through my two morning classes, the return through BART and was grateful for a pick-up by George. I was going to use the excuse of being completely brain dead as to why I wasn’t really studying for the rest of the day. But really, is knitting a complicated lace something I should be trying in a brain dead situation? 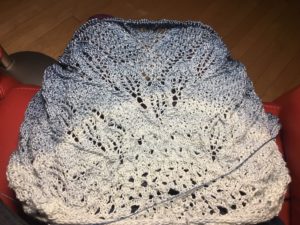 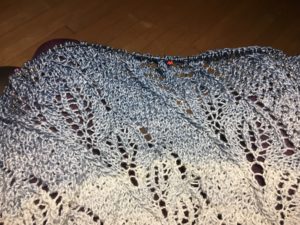 I won’t bother to tell you how many corrections I had to make on the return rows to finish the last portion of clue 3. Let us just say that there were a lot of yarn overs and beads involved.

Yep. Gave up. Went to bed with the intention of getting up early….