which means that I am listening to audiobooks more than reading. Since a new Michelle Sagara “Cast in” came out, I listened my way through most of the previous ones that I own. Downloading the lowest quality format from Audible was possible with patience but I can really tell the difference. This was followed by Alison Kent’s five book “Hope Spring” series. I was going to move on to non-fiction, but that would take a bit more concentration on my part. I had picked up one of the Great Courses on Forensic Science and also “The Time Traveler’s Guide to Elizabethan England.” I found that concentrating and not losing my place was not one of my stronger suits when confronted with knitting involving shaping or counting for the moment.

Anyway – back to the hats – 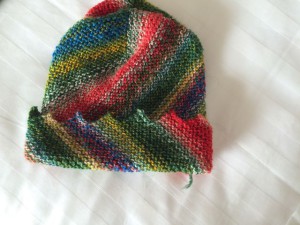 which is knit out of the heavier Zauberball on 2.5 mm needles. It was to be an adult hat, but I didn’t complete enough repeats in each of the quarters (see comment about knitting, listening and non-fiction above). 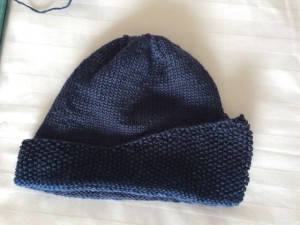 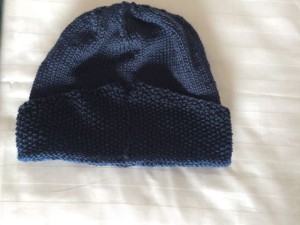 Knit on 3.5 mm needles out of Gradient and needing the buttons on the front flaps to complete the hat. 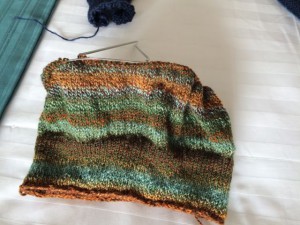 which was started on scones day – but after knitting the band (channel cast-on, split and the two sides knit up to form both sides of the band. After joining I happily knit on, then found I didn’t have any more yarn. Slid over onto an extra needle, it will have to wait till I get back to Germany. I don’t think I have anymore, but I do have dark green….

Also knit on the train between Heidelberg and Venice, I thought about giving it to one of my fellow passengers. In retrospect it might not have been a bad idea. While on my way to the ship on the 14th it fell from the top of my shoulder bag. I saw it picked up, a grin, and being placed firmly on a young head which dashed away calling down the other side of the bridge – probably to show her mother her new treasure. It is young girl colors and I think it wanted to find a home other than with me.

This is from at least a week ago. Egbert retired from the German Air Force not all that long ago with a fair number of years actually spent stationed in the US. He and my husband seemed to have a good time talking history and politics on the previous cruise. This was good from both of the non-interested women’s point of view. Egbert had also made a few comments about cold head and cold ears, asking when I was going to knit him a hat.

Easy – I always have more hats than I have heads to wear them. And any hat that finds a home is one less I have to pack into the suitcase even tho packing hats is easier than balls of yarn.

Exeter is one of the best guy hat patterns in existence. It stretches. It folds flat and the brim is about a deep as one chooses. And as you probably guessed – 2.25 mm needles out of Crazy Zauberball. 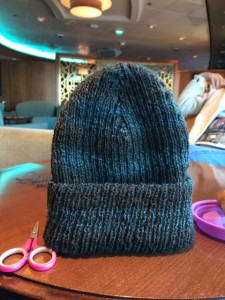 Other detours involved finally convincing my laptop that I did want to download various photos which had been residing on my phone for a while and editing a few hundred photos of this trip through the Suez.