StomperUnlike the last two games, there was both good pitching and some I passive hitting as the As pulled off a victory.

As an afternoon game, there were no where near as many people. There was still an active group in RF149. It seems like the LA fans object to us, calling in to the online radio crew about hearing drums, chants and noise makers in the background. Since they are the only fan group that seems to complain, we are ignoring them. What wasn’t getting ignored today was the rain. 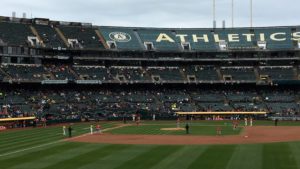 Or the food trucks.  Someone had the brilliant idea of inviting the Foodtruck Mafia to set up on game days. We now have 4-9 food trucks with a great variety of goodies.  The Mex Truck yesterday was even willing to make me a cheese quesadilla even tho it wasn’t on the menu.

then we had the visitors 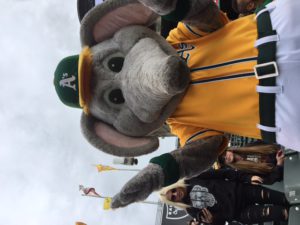 which also included an on air reporter who wanted the history behind the Right Field fan group. It was interesting listening to a tradition that dated back to several members parents, their childhoods and a general glee in enjoying the game.

Otherwise, I am starting, almost, to fell like a human being again but it hadn’t been a good time. Going to have to talk to my doc about moving up scans and dropping one of my chemo meds. Killing off the lymphoma is what is planned.  I can’t afford cardiac loss; we live on a flipping hill.