It was insanely early at Oakland Airport. Not that I was any less insane than the other people stumbling around in their attempt to drop off luggage, clear security and board flights prior to 0530 in the morning. (I have the best husband. He drove me to the airport rather than send me by Lyft – this being a couple of hours too early for BART). In fact, he was back home well before I survived all the hurdles between me and the gate. And, since I am flying east with the accompanying loss of three hours, leaving early made sense.

You can’t fly directly to Cincinnati on Southwest. There is always going to be a plane change involved. The only decisions (besides time of day) is where to change planes and how long to allow between flights. There are airports I would prefer to avoid (anything north during snow season) and time (an hour at the absolute minimum). And before anyone reminds me that there are direct flights – those flights, by the time you add on all the fees, are significantly more expensive. I do have the time….

In today’s example, my best choice was Midway – as in Chicago’s Midway Airport. International at that since you can fly directly to Toronto… and Cacun, and Cabo… but mostly it seems to be a lot of flights on Southwest Airlines

As I think about it, the last time I was here? June of last year on my way home after deciding that Amtrak in coach for two days (Chicago-Emmeryville) was an experience I could do without.  We were late on arrival to MDW. I wasn’t that concerned, since I had allowed plenty of time between flights. Turning on my phone, it turned out that my departing flight was going to be a minimum of 45 minutes late. More than enough time to stop by the USO (located inside security instead of before security).

Both flights were packed full, replete with people who didn’t seem to be able to either board or exit the plane promptly. I used Lyft to get to my hotel where more fun began. USAA, in spite of my placing a travel notice, didn’t want to run through my room charge. Ok-  secondary card worked.

Then I went up to my room.

Nope, no how, no way. I don’t know what the previous room occupants had been doing, but there were still dresser drawers out, a bare mattress/box springs, an abandoned paint & roller pan along with a noticeable lack of the usual electronics one expects in a hotel room.

Back down to the front desk. Sorry – looks like that room isn’t ready – in fact it appears to be partway through some significant repairs. The check-in person says ” are you sure?”

OOOkkkk. Yes I am sure. I am assigned another room. It is fine, but not the same category that I booked. I will be fine without the extra space & the microwave. But I decided that it would be much smarter to talk to management in the morning about an adjustment to my room charge….

So – two plane flights, a most excellent transfer on Lyft and progress on Pisces

which went from this 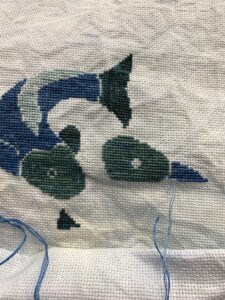 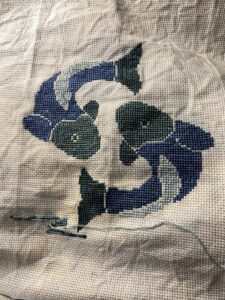 there are a lot of stitches in that fish…..