It was a dark and rainy day and my name might well have been Snoopy or Charlie Brown.

There were two options: the first was to board a bus at early o’clock which was making a trip to Pecs, then meeting us in Vukovar by later in the afternoon; the second was to stay on the bus and get off in the afternoon if one so chose.

Shouldn’t be hard to guess my choice. The last thing I really wanted to do, after yesterday, was to be on a bus for – oh let us say – nine + hours. George likewise elected to stay on the ship. It might have to do with having been to Pecs before (that was where the NordPol BDE had its logistical and support HQ during IFOR & SFOR.

[if you don’t know the abbreviations – not to worry…]

Having been there before, this was one place which I had no real need to revisit. If it was the same – it would be horrible, if not, well, lack of recognition could be irritating as well.

Our border. crossing out of the EU was nothing – 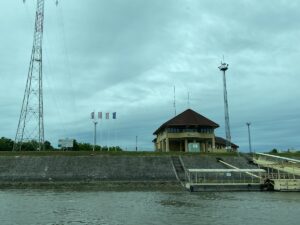 We stopped long enough to have agents come on board – take the pile of passports – eye each one of us in tern which took all of 15 seconds – and then the passports went back into the cubbies at the desk. According to the bus crew – they all had to exit the bus and individually have their passports checked (and stamped for exit and entrance) before rebounding. All told? About 15 minutes, not the hours of threat they had received before hand. 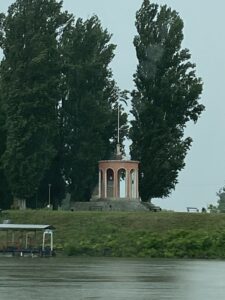 we passed the occasional memorial along the river.

Oh, and given dredging up old history – I started pulling up my email files from 1998. I also checked out a number of old email addresses from that time period. Of the nine on the “who knows list” so far seven have bounced.