Here in Prague apparently one calls them “towns” rather than quarters – so that there is Old Town, New Town (1400s), Jewish Town etc. At some point the latter became a classical Ghetto complete with walls, a gate, and a large key to lock the populous in at night.

Starting at 0900 this morning, there were seven of us (split between the Alumni groups and the Smithsonian group) who accompanied the local Czech Historian who served as our guide. Up front, his knowledge about European history, Czech history, and Church history was excellent. His knowledge of Judaism obviously came from books and some of his reference material wasn’t completely accurate. Just saying.

I have few photos – my camera is choosing at the moment not to communicate with my computer and I am too tired to deal with it. Something about running out of energy at the end of the day followed by waking at 0300.

Where was I? Oh, yes – four synagogues, ?or was it five? plus the cemetery. I will send you links once I sort out the photos.

What I can offer is also the most well known of clocks – the Prague Astronomical Clock (dating from 1410) which we saw right at 1700. The skeleton rings a bell and apparently those are apostles who rotate behind the upper closed windows. It really is most fascinating. I have the Nautilus Puzzle which actually provides an amazingly detailed look at the upper face.  The writing is obviously not visible from partway across the square. 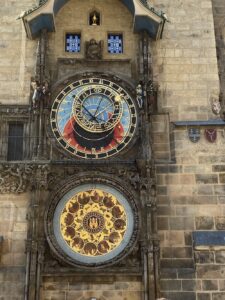 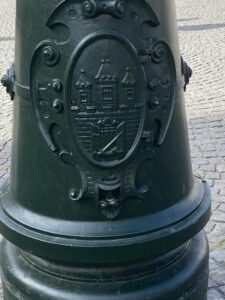 Of three towers can be found on just about every large lamp post and a lot of other city property.

A bit more progress on Leshy