Early, or was it middle of the day? It all blurs after a while. I became the delegated driver to transport keys so as to let the carpenter in to finish door jams and weather stripping on Dani & Alex’s house. I don’t blame the carpenter for not wanting to have a ring of client keys. He fixed the gate while waiting for me, so I didn’t feel too badly.

I don’t travel without something to do, so I occupied myself for the next few hours. If I had been brave, I could have hung a few more strips of wallpaper, but that is really a two person job. It also might have helped had I remembered to bring along some lunch. But I made progress on the LongDog. 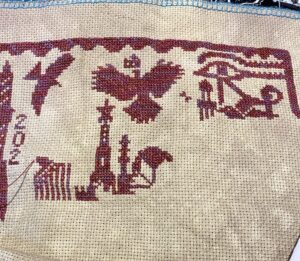 It was when I was locking up downstairs that I realized that I really hadn’t needed to stay. There are two sets of locks on the door. Yes, I prefer the deadbolt also locked, but the main lock, which the carpenter had engaged, would have been fine.

Trundling on home, I had enough time to find lunch (or was that breakfast) before a Zoom meeting. Two hours later, I had made some progress after a significant amount of picking out and restitching.

Tomorrow is an early day and I am wiped.