I was half listening to the tannoy when something penetrated. The Captain was saying that we were slowing down because of the …….. I heard waves. Huh? then he said something about both sides of the ship, and breaching.

Then the penny dropped. Whales, he was talking about sailing through a pod of whales. Now, I didn’t bring a regular camera with me, just my phone. So I saw tails, but not close enough to make a decent picture. Unless, you would like pictures of grey waters, waves to the horizon and overcast sky.

(insert a break of 20 minutes here of standing on my balcony gazing out to sea. There are the occasional blow spout seen but nary a breaching whale. It is chilly out. Even with the sun occasionally breaking through the clouds it is still barely above freezing….) 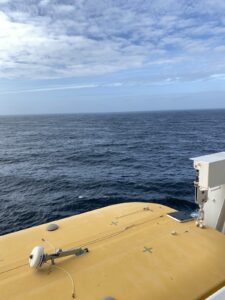 Otherwise, I headed to Coastal Kitchen for breakfast, had the “meal with an officer (no officers at the tables) for a lovely lunch, then spent the rest of the day relaxing and stitching (except for my attempt to see whales and find two colors of floss that I seem to have forgotten to bring) 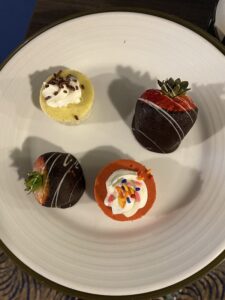