Rather than come in the day before, I chose to make poor George get up early this morning in order to drop me off at BART. Like before 0600 early in order to have an uncrowded trip to OAK (which technically is Oakland International Airport, but really, it is the local Southwest Airlines hub). I managed to get checked in and on a hunt for a morning latte by 0730 which put me well ahead of the game.

My flight to SEA-Tac was completely full of course, but I was early enough in the boarding process that I was able to snag one of my favorite exit row seats. Arriving in SEA (finally, we sat on the runway for 20 while waiting for a gate to open), I followed the fish out of the terminal and down to baggage claim. I almost managed to snag a ride on. the Cruise bus, but the driver had just booked the last seat, so it was Lyft for me.

Considering it all, the check in process went fairly smoothly. I had a chance to talk with some lovely people in line while we snaked back and forth prior to entering the terminal. From there, check-in, security and boarding took just a few minutes to complete.

I have a nice balcony (which was not significantly more than if I had booked an inside cabin (so why bother). 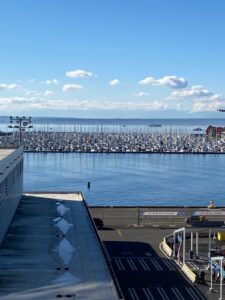 Standing on my balcony – I looked out over the pier and beyond to the small boat harbor which seems so packed that I wonder how anyone manages to get in or out.

I am on Deck 7 – I can look down at the huge life boats.  Surprisingly for a US based ship, my cabin has a kettle. 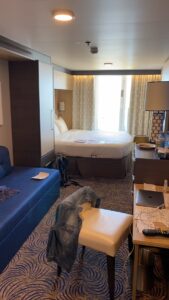 My stateroom attendant has already dropped off the extras (nicer soap, shampoo & Conditioner) along with a comfortable bathrobe. It wasn’t chocolate covered cherries, but there were cookies to greet me…

Now all I have to do is figure out where I am going to eat….